Posted on June 25, 2013 by detangledprosereview 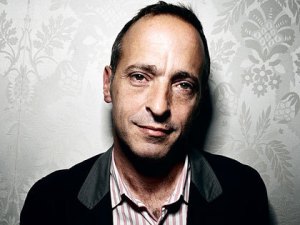 David Sedaris is not for everyone. In fact, I would go as far as to say he is not for you. He may be a bit crude for your taste, Let’s Explore Diabetes with Owls ends with  three words: ‘licks his anus.’

Sedaris mostly writes in a tricky genre: Narrative non fiction. Which bits are real and which are elaborate manipulation of the truth? There are a few fully fictional shorts included in the anthology, placed at apparent random between obvious autobiographical essays. In one short, the narrator reveals herself as a tea party member.  Even the obvious autobiographical essays with characters like Sedaris’ long time boyfriend Hugh are suspect.  Did Sedaris really touch a mummified cut off arm of a sailor from the 1910’s? Does he really spend his days collecting trash by a country road in Sussux? Ok, he confirmed the trash collection in an interview on NPR.

I  have such an evolved sense of humor that when I went to experience Sedaris read last winter, I cried big fat copious tears of laughter. People like me, highbrow humorists, use words like copious every day.  By the time Sedaris got around to reading The Happy Place, included in Let’s Explore Diabetes with Owls (Publication date: April 23rd 2013) my vision was fully blurred.  Sardis was a glowing white shirt behind a podium with a high-pitched voice.  I could have had the same experience squinting out the window at a street lamp and listening to This American Life on the radio.  But then I would not have been able to meet him. He would not have signed each of the five books I’d read that he’d authored.  He wrote all sorts of witty things in my books like lets celebrate life with thyroid glands and thank you for making me rich, making the three-figure ticket totally worth it. 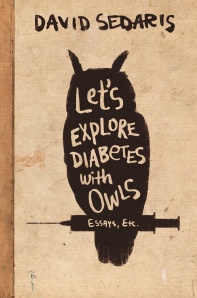 Let’s Explore Diabetes with Owls read like a conversation with a long time friend who never asks: How are you doing? Tell me about your day! But I choose to keep this friendship because David is so goddamn entertaining and I console myself by admitting that he does care about somebody, even if that someone isn’t me.

If you do happen to get his humor, he’ll be that voice that says you are as weird as they said you were and that is why we like you.  Then, before you know it, you’ll be reading ‘licks his anus’ and wishing for more.

I am a human rights advocate with a knack for inter-contextually. I am a storyteller, a ceramists, a pan-art lover, a feminist, and a humanist.
View all posts by detangledprosereview →
This entry was posted in Book Recommendations, California, Criticism, Literature, Memoir. Bookmark the permalink.